Why Are Organic Apples Better Than Conventional Apples?

Fruits should be an inseparable part of our diet. We’ve been taught since we were kids that this type of food is one of the healthiest and most delicious, and as we’ve convinced ourselves long ago, this statement is totally correct!

Try to think of 10 fruits right now… We bet apples were in the list too, right? It’s natural to think of them, because they’re one of the most famous and eaten fruits in the world, there’s hardly anybody who would refuse a nice juicy apple from time to time.

But as with many other foods today, there’s an issue regarding their naturalness, purity, and nutritional profile, all because of the inhumane ways of growing that include the use of pesticides, herbicides, GMO, etc. That’s why in order to be what mother Earth has designed them to be, apples should be organic for the sake of taste, nutrient power, and safety.

We’re going to give you solid arguments as to why organic apples are better than conventional apples, but first let’s pay attention that for immediate consumption, apples should be fresh, rather than chemically processed which is the case with many apple-featuring snacks. That’s how you’ll not only avoid potential anti-nutrients and chemical agents, but you’ll also get to profit from the full spectrum of the nutrients apples are suppose to contain in the first place.

We’re talking about the dietary fiber, the minerals, vitamins, and flavonol antioxidants that are capable of doing a lot when it comes to preserving your well-being. Real apples can: be a detox means, prevent constipation, benefit gut health, raise immunity, help you control your weight, prevent gallstones, reduce bad cholesterol and favor the heart and arteries, lower the risk for diabetes, protect against neurodegenerative diseases, cancer and more.

Maybe that’s why they say that “an apple a day, keeps the doctor away”, right? And it may very much be true if the apple is organic and pure, rather than GMO and pesticide-contaminated. 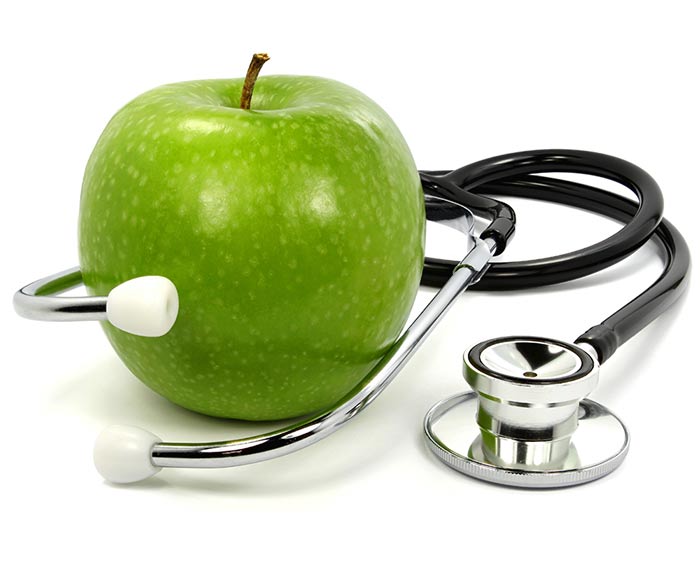 Now let’s proceed to the main topic here, and point out the importance of eating organic apples instead of conventionally grown ones.

1. Conventional apples have pesticide residue on, and inside them.

We’ll start by noting that mass-produced veggies and fruits, including apples grown without using organic and sustainable methods, have pesticide residue on them, even after you’ve washed them under the running water.

Conventtionally-produced apples contain more pesticides than any other veggie or fruit! There’s even an awful statistic stating that 92% of 700 washed apples originating from various parts of the United States, still contained pesticides. And we’re not talking about only 1 type, but whole 48 different types of pesticides! (the information was synthesized after USDA data analysis, done by the Environmental Working Group).

Many of these pesticides have been connected to the development of all sorts of health issues. For example there is a wide use of a certain pesticide called Paraquat, which is produced by the agriculture company Syngenta.

The pesticide is said to be associated with increased risk for Parkinson’s. To boot, Michigan apple growers have applied two times in the last 3 years for use of an antibiotic named kasugamycin, which is labeled as unapproved, because the aftermath on animal reproduction and water is unclear. Generally, the type of chemical compounds (used for pesticides, herbicides, insecticides, and nerve gasses) called organophosphates are substances found on 81% of mass-produced apples. Numerous studies doubt if even allowable amounts of these pesticides are considered safe for humans.

Besides organophosphates, pyrethroids, carbamates and chlorpyrifos are also widely used around the world, as the latter chemical is linked to higher chance of ADHD (Attention Deficit Hyperactivity Disorder) and lower IQ in children, which is worrisome, because it’s being used on nearly 59% of US apple orchards.

2. Laborers and farm owners are also affected by the pesticides and herbicides.

Those who spray the apples and live in the same area where they’re being grown are also unavoidably affected by the chemicals. The Agricultural Resource Management Survey of organic apple producers in 2007 (done by the USDA) found that many of the farmers prefer the way of organic production not only to increase their profits, but also to preserve their families’ and the community’s health, as well as to protect the environment.

Right after oranges and grapes, apples are the third most grown fruit in the United States generating gross profits of 2.2 billion dollars each year. There are approximately 350 000 acres in the states which are specially used for growing apple trees, as the fruit can be grown almost everywhere. Unfortunately, only 6% of the total apple production is organic. In land, that equals to 21 000 acres situated only in Washington and California.

This means there’s huge space for a change in a positive direction, because if more people started to opt for organic apples, there would be a justifiable reason for farmers to switch to organic practices. That way they would increase their income, boost local farming, and last, but not least, they would provide consumers with safe to eat apples. Organic farming brings numerous benefits for the consumer and the environment too, take a look at this infographic to learn about some of them: 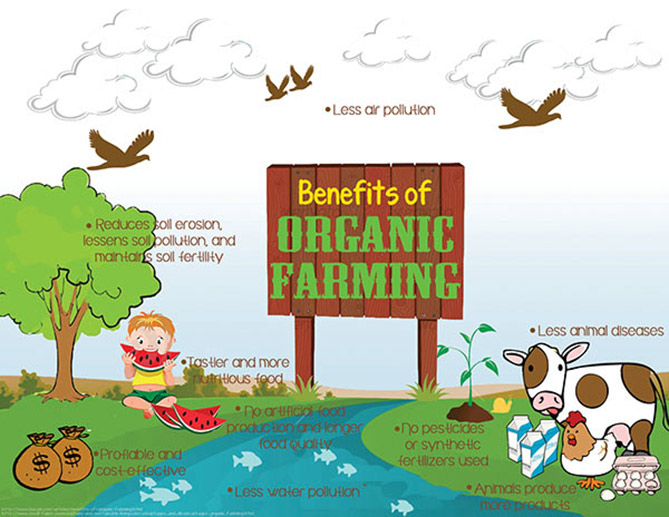 Despite what biotech companies like Monsanto have to say in favor of genetically modified food, the truth is that the federal departments that are responsible for the safety of food have not carried out experiments to assert that GM foods are completely safe. What’s more, artificial genetic modification has been connected to organic failure, tumor growth, liver and kidney damage, gastric problems, allergies and more.

Dr. Mae-Wan Ho of the Institute for Science in Society is one of the most eminent scientists to address the situation with crossing GM DNA with our own. According to her, horizontal GM DNA transfer to the cells genome is noxious as a whole, but there are additional dangers originating from the genes or genetic signal in the GM DNA. GM DNA jumping into genomes cause ‘insertion mutagenesis’ which may lead to disease-causing dormant viruses or even worse, it may lead to cancer. Dr. Ho also says that genetically modified DNA in many cases contains genes that are antibiotic-resistant and can grow to pathogenic bacteria, making infections very hard to treat.

Just like pesticides, GMOs have a bad influence on the environment. Take for example the large test facility Monsanto has on the Hawaiian island of Molokai. On this territory, there are reports of deaths, uncontrolled cross-pollination, asthma, skin rashes, infertility, pesticide-containing ground water, polluted air and more.

To boot, genetically modified foods (and apples in our case) may have their nutritional value altered or reduced. Here’s a quick comparison between non-GM corn and GM corn done in 2012. It states that GMO-free corn contains 7 times more manganese, 56 times more magnesium, and 437 times more calcium than GM corn that was even found to contain 13 ppm of glyphosate. Choosing organic apples over GMO apples can avoid that for you.

In terms of taste, there’s no doubt that apples grown using organic, sustainable and humane methods, are a lot more delicious than their conventional counterparts. Remember that food has to be grown and eaten the way Nature has decided, tampering with it like that can’t lead to anything good.

5. Organic isn’t that much more expensive than conventional

The claim that conventional food is much cheaper than organic is rather superficial. Averagely, a pound of organic apples costs somewhere between 2.34$ and 2.99$, while non-organic apples cost averagely 1.57$ a pound. The margin is not substantial, and it’s really not worth it to risk your health in the long run for a dollar a pound. Distributing your budget smartly every month will easily let you spend money on organic food without having to pay a lot of extra dollars. It all depends on you.

Read More
What is Karela and What Are Its Health Benefits? ( + 5 Top Karela Supplements To Buy)